The “Triquetra” Wheel of the year (Wood Board)

No reviews
Shipping calculated at checkout.

The “Triquetra” Wheel of the year (Wood Board)

The beautiful magical engraved wheel of the year also features the symbol triquetra.  Triquetra interlaced with circle as Christian Trinitarian symbol (a "Trinity knot"). Examples are shown below and on pictures above!

Check out this YouTube video that was made by “Bewitching.Bemused” https://youtu.be/EJ2w2W-H8sM

(Please note that The Magic Moon Garden is not affiliated with the company Bewitching.Bemused.  I’m sharing the video so a beginner can watch it and get a better understanding of how to use “The Wheel of the Year”.)

The Wheel of the Year is an annual cycle of seasonal festivals, observed by many modern Pagans, consisting of the year's chief solar events (solstices and equinoxes) and the midpoints between them. While names for each festival vary among diverse pagan traditions, syncretic treatments often refer to the four solar events as "quarter days" and the four midpoint events as "cross-quarter days", particularly in Wicca. Differing sects of modern Paganism also vary regarding the precise timing of each celebration, based on distinctions such as lunar phase and geographic hemisphere. 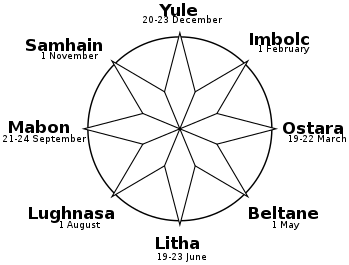 The Wheel of the Year in the Northern Hemisphere. Some Pagans in the Southern Hemisphere advance these dates six months to coincide with their own seasons.

Observing the cycle of the seasons has been important to many people, both ancient and modern. Contemporary Pagan festivals that rely on the Wheel are based to varying degrees on folk traditions, regardless of actual historical pagan practices.[1] Among Wiccans, each festival is also referred to as a sabbat(/ˈsæbət/), based on Gerald Gardner's claim that the term was passed down from the Middle Ages, when the terminology for JewishShabbat was commingled with that of other heretical celebrations.[2] Contemporary conceptions of the Wheel of the Year calendarwere largely influenced by mid-20th century British Paganism.

The precise dates on which festivals are celebrated are often flexible. Dates may be on the days of the quarter and cross-quarter days proper, the nearest full moon, the nearest new moon, or the nearest weekend for secular convenience. The festivals were originally celebrated by peoples in the middle latitudesof the Northern Hemisphere. Consequently, the traditional times for seasonal celebrations do not agree with the seasons in the Southern Hemisphere or near the equator. Pagans in the Southern Hemisphere often advance these dates by six months to coincide with their own seasons.[13][38][39][40]

Offerings of food, drink, various objects, etc. have been central in ritual propitiation and veneration for millennia. Modern Pagan practice strongly avoids sacrificing animals in favour of grains, herbs, milk, wines, incense, baked goods, minerals, etc. The exception being with ritual feasts including meat, where the inedible parts of the animal are often burned as offerings while the community eats the rest.[41][42]

Sacrifices are typically offered to gods and ancestors by burning them. Burying and leaving offerings in the open are also common in certain circumstances. The purpose of offering is to benefit the venerated, show gratitude, and give something back, strengthening the bonds between humans and divine and between members of a community.[41][43][44]

It is a misconception in some quarters of the Neopagan community, influenced by the writings of Robert Graves,[45] that historical Celts had an overarching narrative for the entire cycle of the year. While the various Celtic calendars include some cyclical patterns, and a belief in the balance of light and dark, these beliefs vary between the different Celtic cultures. Modern preservationists and revivalists usually observe the four 'fire festivals' of the Gaelic Calendar, and some also observe local festivals that are held on dates of significance in the different Celtic nations.[46][47]

In Wicca, the narrative of the Wheel of the Year traditionally centres on the sacred marriage of the God and the Goddess and the god/goddessduality. In this cycle, the God is perpetually born from the Goddess at Yule, grows in power at the vernal equinox (as does the Goddess, now in her maiden aspect), courts and impregnates the Goddess at Beltane, reaches his peak at the summer solstice, wanes in power at Lammas, passes into the underworld at Samhain (taking with him the fertility of the Goddess/Earth, who is now in her crone aspect) until he is once again born from Her mother/crone aspect at Yule. The Goddess, in turn, ages and rejuvenates endlessly with the seasons, being courted by and giving birth to the Horned God.[13][51][52]

The Holly King is often portrayed as a woodsy figure, similar to the modern Santa Claus, dressed in red with sprigs of holly in his hair and the Oak King as a fertility god.[57][58]

All wooden engraved products are unique, therefore the color and pattern may vary slightly from the picture shown, but we know you will be pleased with the uniqueness of your wood board.

BEWARE of others who sell cheap imitations.  Our quality is by far the best on the internet.

We stand by our high-quality products and ensure your satisfaction is 100% guaranteed. 🌕